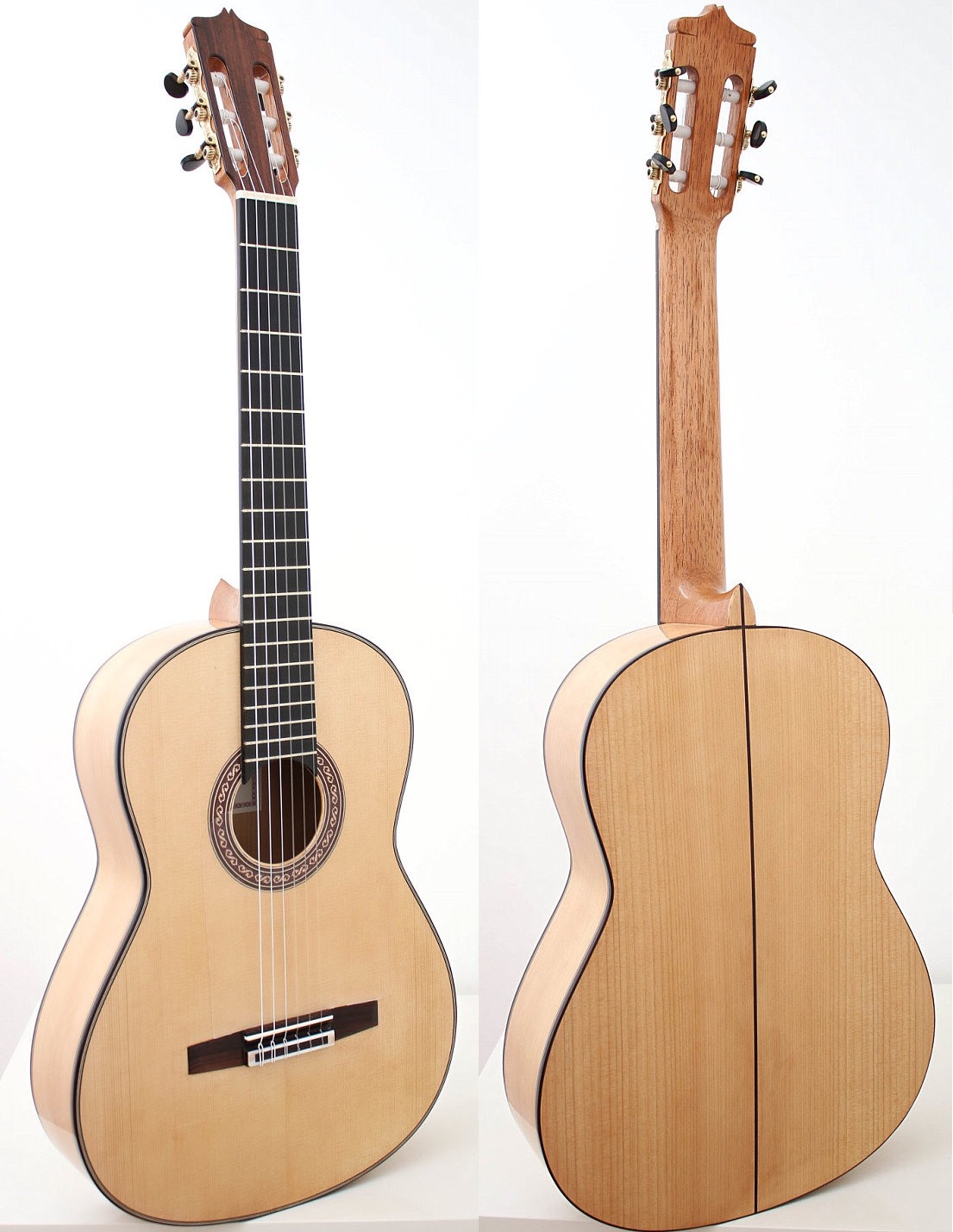 This flamenco concert guitar Eduardo Duran Ferrer represents the traditional Flamenco sound, from Granada, Spain. Only with white guitars, made of Spruce or similar,  and handcrafted in this manner, can a guitarist achieve the desired attack, extreme dynamics and projection required for Flamenco interpretation.

The Ferrer guitar makers have been around since 1875.  In the late 70s,  their expertise was sought after by Yamaha Guitars . Eduardo Ferrer was hired and invited to Japan; during three years he taught Yamaha artisans  how to make and improve their handcrafted line of classical guitars.

This flamenco concert guitar Eduardo Duran Ferrer projects extremely well in the mid frequencies; around 500 hz. All high end notes have brilliant sounding overtones; adding thickness to the overall sound. The low frequency is reinforced by the natural overtones emanating by resonance, throughout the guitar.

Hand picked from the finest selection of Flamenco Artisan Guitars.

Juan, the manager, only accepts those guitars he believes sound right no matter how reputed the constructor is. So when I go into his shop I know I have the best to chose from.

Once in his shop, I sat down for a few days and tried out all the artisan guitars without asking brand or price. I made selections based upon which offered a richer tone, more projection, a larger dynamic range, a balance in all registers and clarity in perception of what I played. I tried all the guitars listed above and chose the Eduardo Duran

In depth selection.
Once I had selected the guitar, I called its creator, Eduardo,  and asked him to audition all his similar models. This took me from Barcelona to Madrid and through 4 stores . I just love picking good guitars. I chooses this one, on sale,  as its qualities were superior to the other: same model, same Luthier.

This guitar blends well in all styles of music; from classical, jazz, folk and flamenco. It works extremely well in rhythmic passages and can projects with extreme sweetness in high registers.

This guitar will definitely add distinction to your live performances and recordings. Your work will ultimately stand out more than with other top model guitars.

Personally, when I play this guitar,  I enjoy been able to portray more emotions; the instrument seems to come to life with each new passage.  You will enjoy the variety of timbres, the dynamics , the attack and the authentic Flamenco sound.

This guitar will make your dream sound come true.

In the video I compare this model of Eduardo Durán with a Hermanos Conde handcrafted  model I bought back in 2006, in Madrid, at the original Conde store, located on Calle Gravina 7.

Included in the price is the  Hiscox Pro-GC-LL guitar case, (Valued at  $360)