Hi I am Thomas. Welcome to my live stream today from my studio in New South Wales in Australia.

How to Choose the Right Chords for your Composition.

Today we’re going to talk about how to choose the right chords for your composition. Sometimes as songwriters, composers or arrangers, we might feel that the song we are performing, recording, needs to sound a bit better.

Strip Down the Melody

Well, if in any doubt I suggest we try the following, with the objective of understanding our basic harmonic options, so later on we can develop those and bring a better picture of what we want to explain.

What is the Key

Okay, so we listen to the melody and we figure out the key. Out of all these notes that we’ve sung, it’s time to change the camera so you can see me on the side, and there we transition so out of all these notes, let’s sing the note that actually feels like the resting place.

The note that feels as the resting place.

Find that note that is what we call the key. Okay, knowing the key, the resting point of the song, we can now figure out all the chords that we have, to talk about this resting point.

What is the harmonic mode

This is going to give us other options in this song and to develop a more consistent relation of chords, that will make it much more fun for us in our playing. So we understand the tonal center is C. Is it C major or C minor? Let’s try a major chord, it’s a major, let’s try minor now.

That doesn’t work, even though in the melody I do have an E natural so it is  telling me that the chord is actually a C major chord. So once, we know it’s a C and it’s a major chord, what type of major? We know that we have major chords in the scale on the 1, on the r and on the 5.

How to find the Mode

So what I suggest is actually to play that melody. You play it and then you fill it in with the scale.

So let’s start talking about that melody with the C scale: two, three, four. Does it sound right? Let’s try talking now with the G scale filling in those gaps: One, two, three and four..

Okay and the last scale that we can try is actually the F scale. So we know the tonal center is C and now we’re going to talk about that C with the F scale: one, two, three.

Scene one, there we go, transition. These are the chords we have from the F scale, the C chord we know it’s the fifth chord of the scale, it’s a dominant C seventh. Dominants sound good as a dominant four note chord in an environment where we have triads.

That is one of the basic elements of harmony that sounds even and balanced.

C chord 7th surrounded by the triads of the scale it is derived from. So we have the C chord and we have the D minor, the E diminished, the F, Gm, Am and Bb. Let’s use these chords.

Now let’s go back to the camera.

How to Match Chords and Melody Stage one

Now we have the melody and we’re going to figure out in that melody,  when do we need the chords changing in other words how to match chords and melody.

So let’s get the key, la la la, one two three four…

So basically the chords are changing on the 1 so the first chord we know is a  C, then it’s going to change. So let’s start trying out all these other chords one by one.. 2, 3

Okay the Dm is an option, the next chord in line is the Edim

That didn’t sound too good. The next chord in line is the F.

Okay, that sounded pretty cool. It gives a nice contrast between this, the first bar and the second. The next chord we have left is the Am, 1 2 3 four. That didn’t feel too good at all. There was a clashing with the top notes and the note of the chord. And the last chord we have is the Bb, 1,2,3,4

So our next step is, let’s play it along with the recording so we can actually hear those two chords in action and see if we need anything else.

Okay here we go, I’m going to play it once and since it’s on the loop, on the second repetition I’ll just add the chords.

How to Match Chords and Melody Stage two

That sounded pretty nice.  I hear something else in that melody and I feel I need something else.  So more or less on the third finger, I’m feeling that the chord has to change.

So, I did the same as before and I tried all the different options we had, and from the C, I went to the Dm to the Edim, to the F ect.

Let’s try now the E diminished. That could have worked. It created a bit of tension before moving to the F, on beat number three.

Then I can’t go to the F, because the F is actually the same chord that we are going to in the next bar

So I finally ended up with C for 2 beats then I changed on beat number 3 to the Gmin because I needed to create a difference and basically the Gm does not have the notes of the C chord and this creates a difference in harmonic tension.

Then I went to the F chord and then I created on beat number three also the same relationship of change of harmonic tension, which in this case I used a Bb so it sounded like this.

This would be like looking into the details of how to match chords and melody.

In context. Let’s play that in context with the band.

How to Layer the Chords

Okay, I like that. So, we’ve got our chords that are helping the song sound better to create more movement with the melody and it’s going to make it flow better.

How to Play these Chords on the Guitar

Okay so now we have created the bass line and it’s time to consider what are we going to do with the guitar.

Whenever you think of playing the chords, consider that you can play the chords with 1 note,  2 notes, 3 notes or 4 notes, if it’s the seventh chord.

So we’ll start off by actually creating a melodic line just with one note.

Remember the objective of chords is to define the groove.

How to Play the Chords with one note

I considered and I actually concluded that I wanted to  play the chords, define the chords, with one note at a time and I came up with this line:

An ostinato over the C chord and when I go to the F I decided to make it b7.

Let’s listen to the recording.

What else does the Song need

Feels good. Now  we’ve got the groove going well, the bass line is defining the chords in a melodic manner, it sounds very independent.

The guitar plays the chords a melodic line, adding a nice groove to it, a nice ostinato.

Then I considered what else I needed on this song to make it sound complete. So I decided that I needed some clear chords. Clear chords means chords created following the harmonic series, but basically I’m talking about triads. So closed triads in an octave or open triads where one note is dropped an octave.

An open triad would sound wider and also clear.  Notice, I’m not strumming these typical chords. I’m really not playing that way because it doesn’t add clarity, it would cover up a lot of the drums.

So there’s another way of creating this flow which is defining the chords with melodic lines as I did a few seconds ago.  We can just play the chord and let it layer, in a way that it just floats and the result is this I recorded with a piano.

Let me put that on a loop and repeat it again. 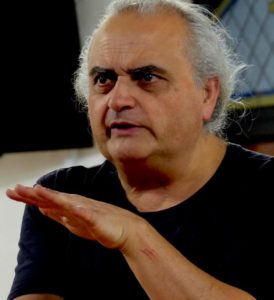 What have we done here today, what  have I done?

We’ve stripped a melody to its basics, so we heard a melody, without any chords. This gives us the option of a clarity of what can I add to that.

So how do we do that?

We found a tonal center.

We found that it was C, then we decided that the C was major.

Then we actually decided what major it is.

So in this case it could be the C chord of the C scale, it didn’t sound like that.

Then I just created an outline of where the chords change

In this case every bar there would be a change of chord, where it would go from Cto the F.

I also decided that in between these chords and bar on beat number 3, I felt there was a need of other harmony, to create a movement. So in there I tried all other chords, basically chords that are not similar to the previous notes,  giving me the option of creating movement.

How to Layer the Chords

The next step was, let’s transfer this to the band.

How do we create a bassline that defines a chord in a melodic manner, that creates a nice groove and is independent.

I recorded that then I said let’s add on more rhythm, I needed more rhythm and the guitar creates more rhythm with chords.

In this case, I decided on one note,  one note playing the chords.

I came up with that melodic line.

Once I had that, then we had all the open space in the world to actually just define those chords, simply by layering them in triads and open triads, no strumming.

No strumming, absolute clarity. Just on top of the melody and that way we’ve got beautiful harmony, you know hovering around.

And the melodic lines of the other, the bass and the other line, that’s an ostinato, just creates a bit of groove, a bit of melody and the vocal line just pours out with clarity.

Okay that was today’s live stream.

Every week I will be repeating a new live stream with guest artists. I’ll be analyzing productions of other musicians. One of my favorite composers is  Ennio Morricone.  We’ll be looking at his compositions, also Henry Mancini’s.

In music  I always feel inclined to listen to that music which gives me that feeling of absolute clarity, where everything has its own space. Nothing is confusing. So these great composers and even good arrangers like in the Beatles produce songs that you can hear with clarity.

Everything sounds good on its own and every line creates those individual blocks that build the songs, that are just amazing, that you can hear forever and ever.

Full dynamics, you can hear it live and it just  feels great. So  bit by bit I’ll bring all that experience of listening, analysis and start sharing it with you.

We will also have invited artists from Australia and all over the world who will be joining us every week  with different discussions from music to philosophy about music.

So keep on subscribing, tuning in. So thank you all for joining me today.

How to write your own guitar chords
How 2 video? What chord shapes did I use? Triads, fourths, pedals, closed and open position.....
Guitar Chords
What are chords for? Chords are groups of notes played in a simultaneous manner to define areas of harmonic tension.....
Lesson 2 – C and Am chord
Video and transcript of Beginners Guitar Course level 1 - Lesson 2
Copyright 2019 - All Rights Reserved
Back To Top
Search